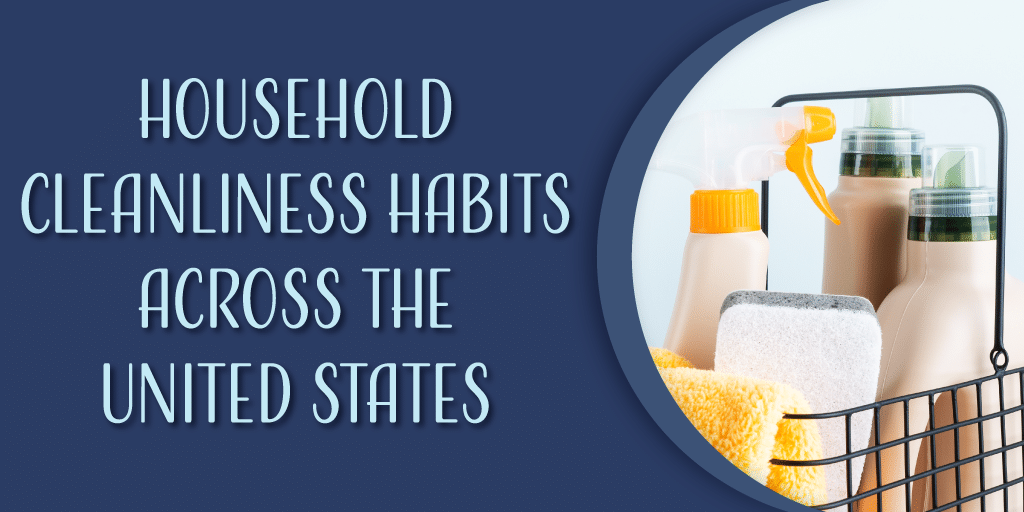 The concept of home is a fascinating one. Although it holds different meanings for different people, we all have a sense of home that unites us. Everyone has a place they call home, but whether that home is a single-family house or Californian villa; modern or traditional; hot or cold; and—of course—clean or dirty; is decided by highly personal tastes and tendencies.

Some people have a deep respect for the home, endlessly tidying clutter and obsessively vacuuming every square inch of every room after a single crumb makes landfall. They take pride in keeping up their home’s physical appearance and like to show it off at every opportunity.

Others treat their homes as a private retreat to burrow into, seeing no harm in tossing greasy pizza boxes on the floor, grinding dirt into the area rug, and wiping up Merlot spills with the throw blanket. Oh, and what is this “vacuum” you speak of?

At the Waycroft, we fall into the former category and exude great pride in our homes and apartments here in Arlington, Virginia. And with vaccines becoming more readily available and pandemic-related restrictions loosening their grip, we’re optimistic about actually having guests in our homes this summer, too.

That got us thinking, do our neighbors in Arlington share our sentiment for tidiness? What about other homeowners and apartment-dwellers across the United States? Where are people most likely to clean compulsively or live in squalor?

To find out where homes and apartments sparkle the most and where they remain in squalid disarray, we surveyed over 900 Americans, including at least 30 in every state. We asked them to rate their own cleaning habits on a scale of 1 to 5, with 1 being the dirtiest and 5 being the cleanest.

To measure cleanliness fairly, we used the same scale that many colleges and universities use to manage their cleaning efforts. Below are the five levels of cleanliness we provided to survey respondents:

We averaged all respondents’ answers in each state to find out where we’d want to be invited to for dinner and where we plan on staying far, far away from. Additionally, we followed up with questions about respondents’ cleaning habits, deal-breakers, and mannerisms when inviting friends and family into their homes.

We were shocked at the lengths Americans will go in the name of cleanliness. Read on to see what we found!

The States with the Cleanest and Dirtiest Households 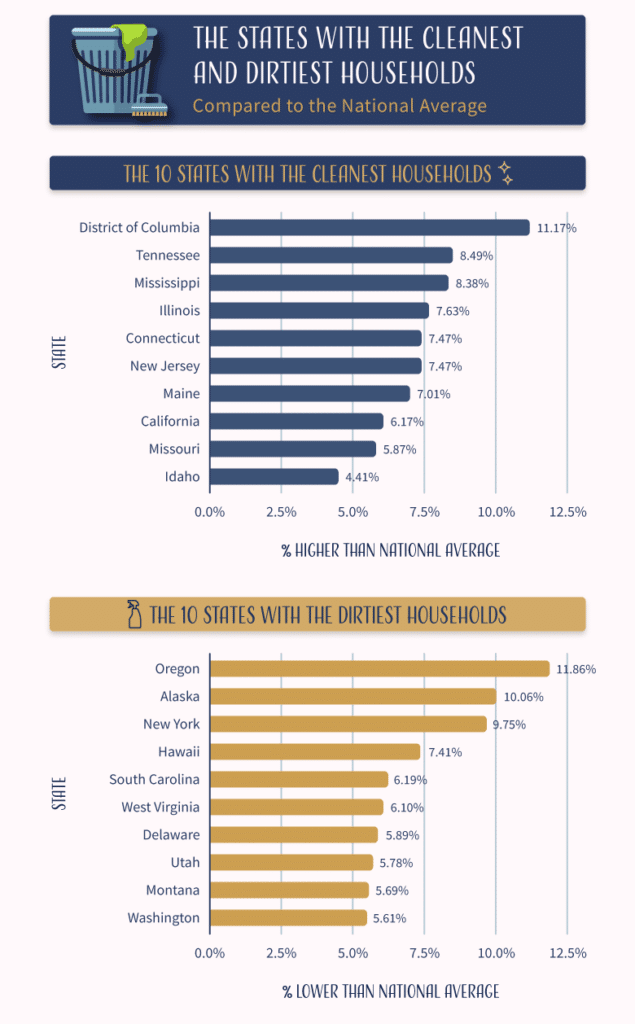 It comes as no surprise that our neighbors in D.C. top the list of the states with the cleanest households. We stand squarely with them, although Virginia as a whole came in at 28th in the nation with a cleanliness score of 3.62 out of 5—that’s 1.2% dirtier than the national average. Tsk, tsk.

Other states that claim to be the cleanest include Tennessee, Mississippi, and Illinois, all of which are at least 7.5% cleaner than the national average. Evidently, Tennesseans like to keep dirt in the stable, not at the table, and they have plenty of Nashville country music to belt out while tidying up.

The dirtiest states in the nation are Oregon, Alaska, and New York with cleanliness scores that are 11.5%, 10%, and 9.8% lower than the national average, respectively. Oregon and Alaska are both beautiful parts of the country with many residents who lead active lifestyles. So we understand how it can be difficult to keep the outdoors, well, out. New Yorkers on the other hand lead a very different lifestyle, but not one that leaves much time for cleaning. Between working, commuting, and all-around bustling, it could be hard to give cleaning a chance.

Cleaning Habits by Gender and Generation 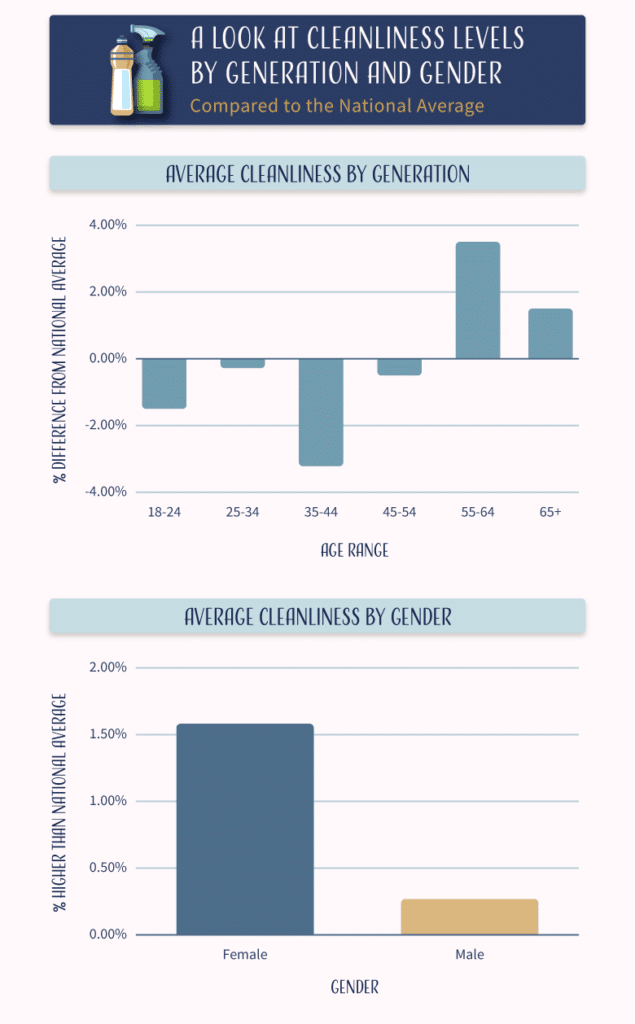 We discovered that location is not the only variable that impacts Americans’ cleaning habits. They are also swayed by age and gender. Gen Z, the youngest group of respondents, still needs more life experience before learning the true value of cleaning. Plus, surviving a messy dorm room is practically a rite of passage. Millennials pick up the torch, however, and hover right around the national average.

Although fairly matched, women have the edge when it comes to cleanliness. They are more than 1.5% cleaner than the national average, while men were just 0.25% cleaner.

So, what exactly is the national average? We held a magnifying glass to America’s cleaning habits, diving into the level of cleanliness, who’s responsible, and how often it gets accomplished. 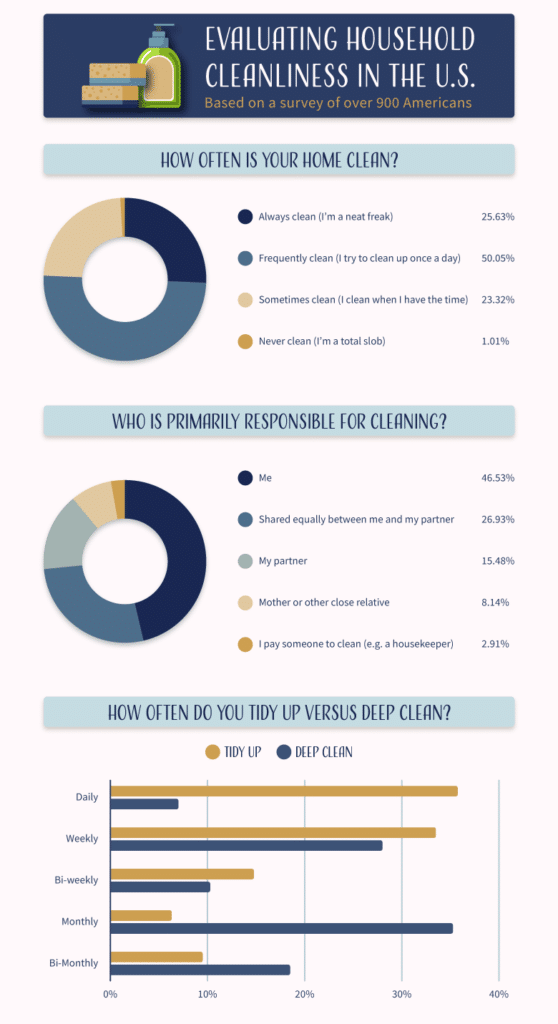 Surprisingly, we found that half of American homes are always clean, while just 1% of Americans never lift a finger and do the dirty work. In between these extremes, about 1 in 4 respondents clean once a day and another 23% make at least some effort but let their duties slip on occasion.

In most cases (46%), survey respondents are responsible for their own cleaning. But not always. Nearly 30% of Generation Z respondents admitted to relying on their mom—or other close relative—to keep their living space clean. Housekeeping is an unpopular option, with just 3% of respondents relegating cleaning work to outside help.

Next, we found out what frequency people tidy and deep clean their home. Because these forms of cleaning require very different levels of effort, we considered both in our analysis.

Tidying is a quick buzz around the place, putting things where they belong, picking up your jeans off the floor, and tossing anything that doesn’t bring you joy (we’re looking at you, junk drawer). Deep cleaning, then, is getting out the bleach and rubber gloves and going to town on your home. When was the last time you checked behind the refrigerator?

The largest group of Americans, 36%, tidy up daily and another 33% make this lighter form of cleaning a weekly ritual. When it comes to deep cleaning, monthly was the most common cadence with 35% of Americans subscribing to it. Surprisingly, 28% deep clean on a much more frequent weekly basis.

If thinking about all that cleaning got you hot and bothered, you’re in luck. We also asked respondents about the role cleaning plays in their romantic relationships.

Don’t Mess Around with Love

Nothing is better at spoiling the honeymoon period than moving in together. Personality quirks that you never noticed or looked past are suddenly glaring. Chief among these is a discrepancy in cleaning style. So what is the biggest cleaning mistake that can break hearts?

More than 1 in 4 respondents agreed that leaving dirty dishes around the house is the worst cleaning offense to relationships. Never offering to help clean and wearing stained clothing were also among the top three. In fact, 36% of respondents would rather turn down a promotion than live with someone who wears stained clothing.

And that’s not all. Surprisingly, 26% would give up family time over living with someone who walks with shoes on in the house, and 16% would trade their tax refund if only their significant other would stop leaving dirty clothes on the floor. Overall, 37% would rather give up their cell phone for a week than be forced to bear living with someone who is guilty of their cardinal cleaning sin.

Cleaning Up for Guests 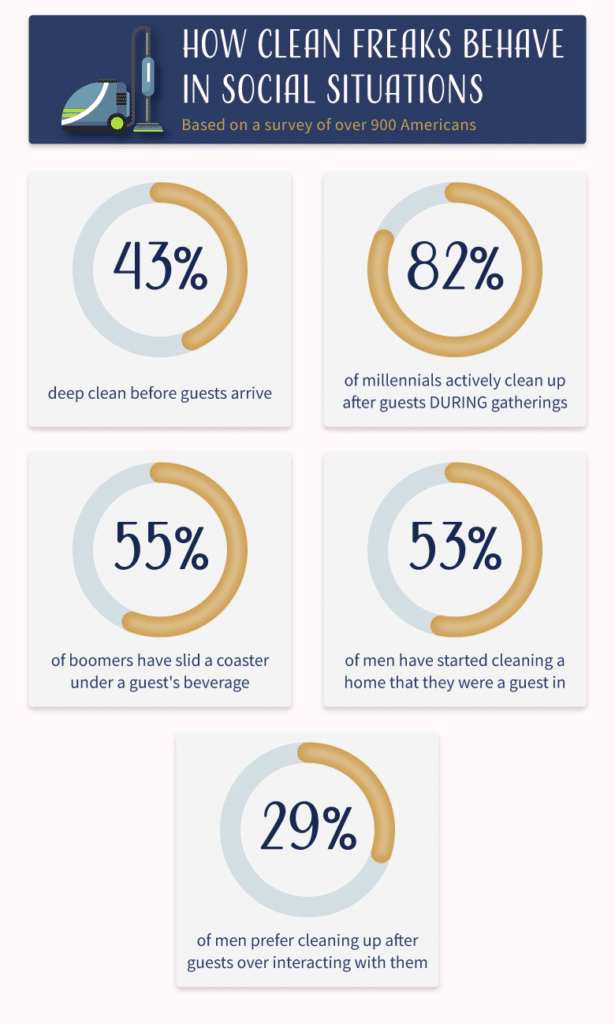 Ok, it’s true. We’d be fibbing if we said we didn’t like to spruce up the place to impress our guests. But where do most Americans draw the line? How far do they go to make their home look presentable for company.

While virtually all, nearly 95%, of respondents perform some type of cleaning before guests arrive, nearly half take it to the max and fully deep clean their home. Millennials can’t cope with the slowly deteriorating state of their hard-earned cleanliness during events. Our results show that 82% actively clean up after their guests while they’re still in the home!

Other generations are not immune to this urge either, with 50% of all respondents reporting the same. Additionally, 55% of boomers admitted to actively sliding a coaster under a guest’s beverage.

And then, there are some who take cleaning to an entirely different level. For them, it’s not enough to have a clean home. They have to be in a clean space, wherever they are. A whopping 50% have started cleaning somebody else’s home as a guest, and 26% prefer cleaning up after guests to actually entertaining them. Now that’s dedication!

In the end, we learned that cleanliness habits are as personal as the homes we live in. Some inhabitants are fine with the filth while others have brazen cleaning habits that even spill over into other people’s homes.

Whoever you are and however you clean (or don’t), we are waiting to welcome you to your new home at The Waycroft which you can personalize however you like! Beauty is, after all, in the eye of the beholder.