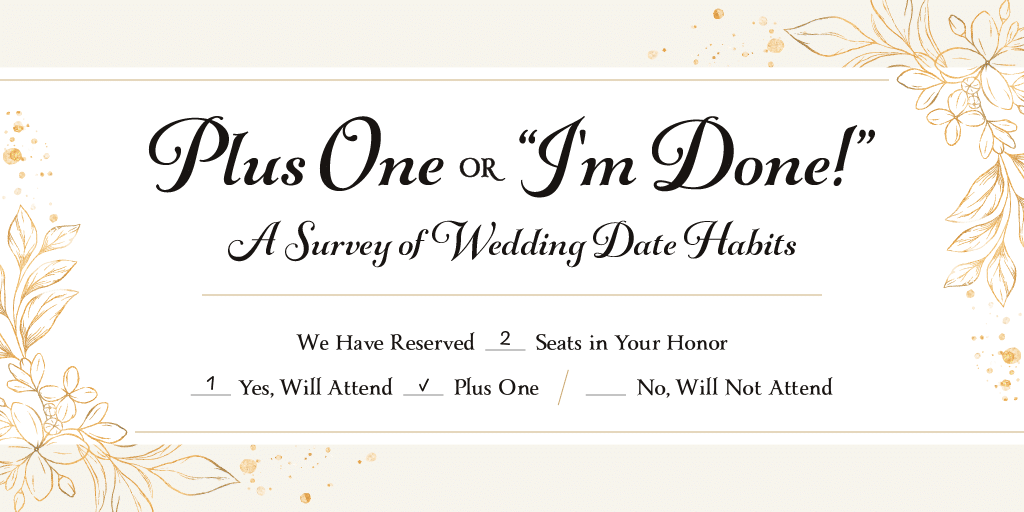 With a backlog of last year’s matrimony peppered throughout the typical barrage of summer couplings, chances are favorable that you will attend a wedding this year. With most of us itching to return to some semblance of our social lives, free food and drinks, music, dancing, and bearing witness to the power of true love sound like a pretty good gig.

Well, it’s all fun and games until you realize you were allotted a wedding plus one and don’t know who to bring. Sure, some guests have a shoo-in like a spouse or a fiancé, but what if you don’t? That’s when the art of bringing a plus one at a wedding becomes much more than an exercise in basic math.

Choose wisely and a plus one can be a stalwart partner to whisk you away from an awkward moment or guide you through a boring evening. Make a mistake and you could be stuck with a wedding plus one that specializes in inappropriate toasts, wince-worthy dance moves, and outright humiliation.

To help Waycroft residents, and Americans in general, navigate this unusually dense wedding season, we decided to analyze wedding date habits. We surveyed more than 1,200 Americans to help you understand wedding plus one rules, wedding date demographics, and the party fouls to avoid at all costs.

Read on to see what we found!

Wedding bells are Bringing (Plus Ones) 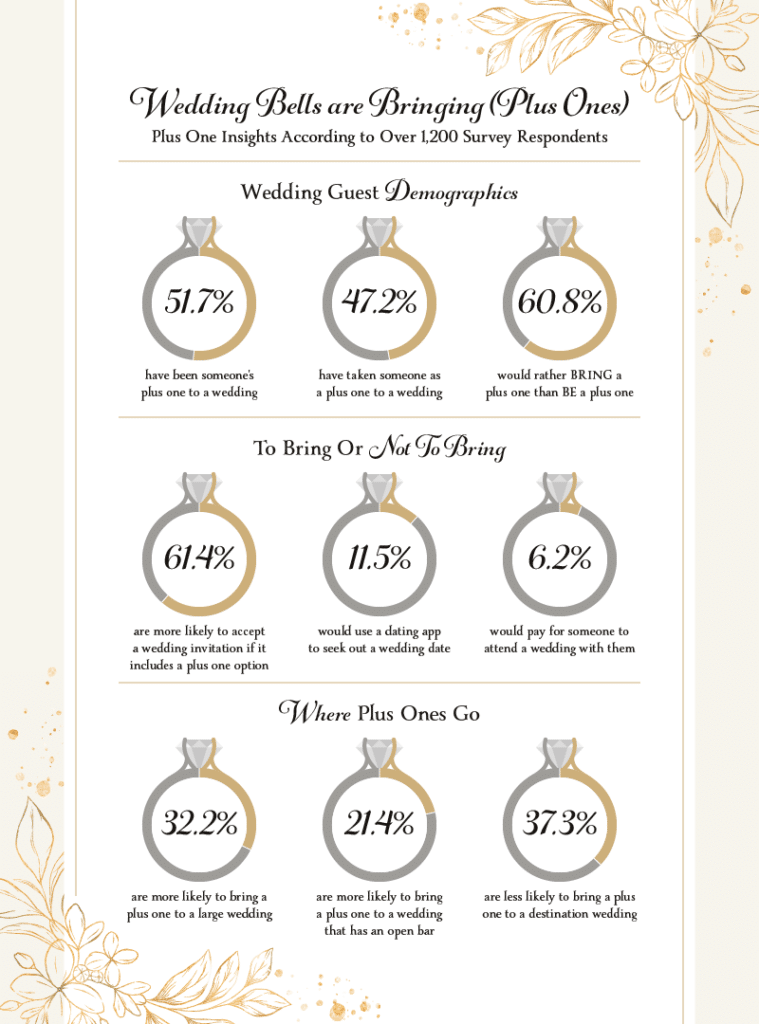 Unsurprisingly, wedding plus ones are a staple of most guest lists. Of our survey respondents, 51.7% have been a plus one themselves while marginally fewer, 47.2%, have taken someone as a plus one to a wedding they were invited to. While both experiences are common, the majority (60.8%) agreed that it is favorable to bring a plus one rather than to be one!

In fact, 61.4% of guests are more likely to accept a wedding invite if it includes a plus one option. However, we found several reasons why the bride and groom might not want to hand out plus ones like party favors. According to our results, 11.5% of guests would use a dating app to seek out a date in a pinch. What’s more, 6.2% would even pay for someone to attend a wedding with them!

We also found that brides and grooms can tailor their weddings to attract or repel high numbers of plus ones. For example, 32.2% of guests are more likely to bring a plus one to a large wedding and 21.4% see your open bar as an invitation to bring a thirsty friend. Conversely, a whopping 37.3% see destination weddings as a turnoff when it comes to inviting a plus one to tag along. 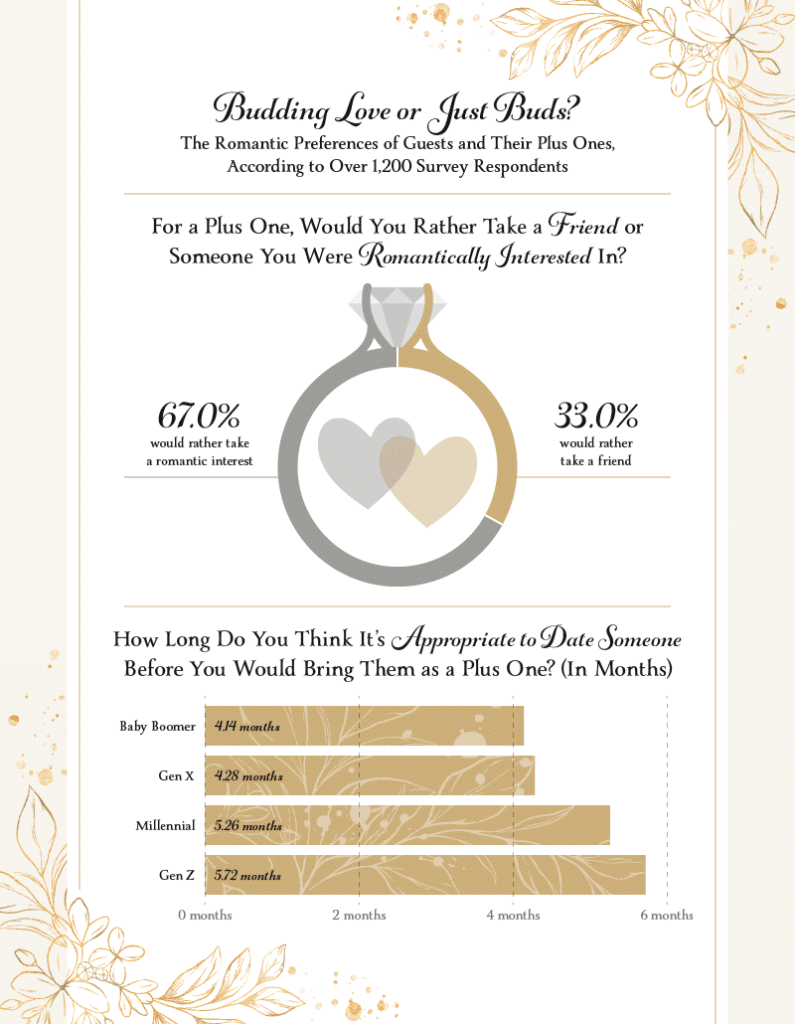 Next, we investigated romantic expectations and preferences when it comes to bringing a plus one. Americans think guests should be romantically involved with their partner for at least 5.1 months before it becomes appropriate to invite them as a plus one.

Breaking it down by generation, the older the respondent, the more relaxed standards they hold. Boomers only felt the need to date their plus one for 4.1 months while Gen Z wanted to hold out for 5.7 months of dating before their partners are plus one material. Yet, despite this clear expectation to be romantically involved with your plus one, 1 in 3 respondents would prefer to bring a friend! If you’re part of the 4% who have lied about their relationship with their wedding plus one, we’re onto you!

Still, we urge you to think twice about bringing someone you don’t know very well. Not only do you risk upsetting the married couple but your plus one might not behave as you’d expect. 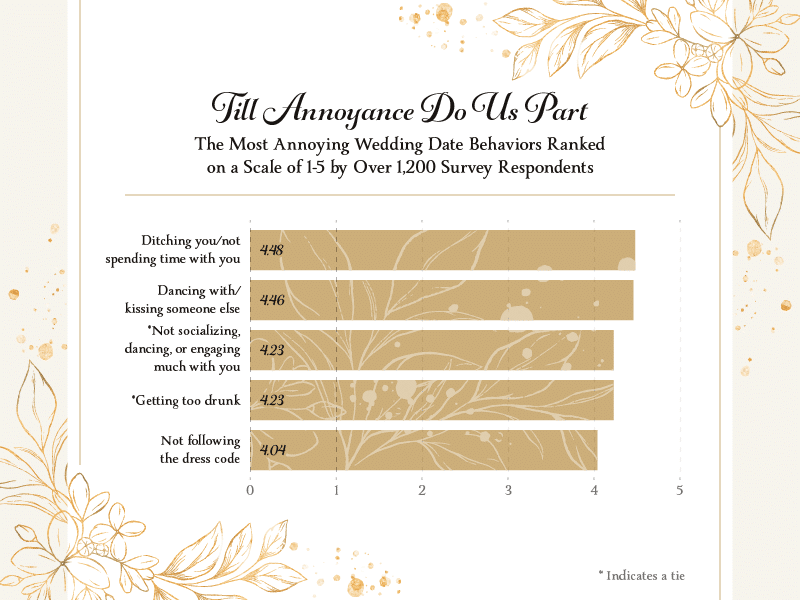 Another cardinal rule is to not invite anyone who will cause drama or embarrass you. To illustrate the point, we ranked the most annoying wedding date behaviors on a scale of one to five. (We hope you have your prosecco handy.)

The most annoying wedding behavior, ranking 4.48, was ditching or not spending time with the guest who invited them. If they’re not glued to your hip, what are they even good for? Of course, no one wants to be given the cold shoulder, but we were surprised to see this rank higher than the second most annoying behavior—dancing or kissing another guest! Wowza!

In the third position, guests again had major issues with plus ones neglecting to socialize, dance, or engage with them. It seems guests use their plus ones as a buffer between themselves and boredom. Getting too drunk and not following the dress code were also hard passes for our respondents. 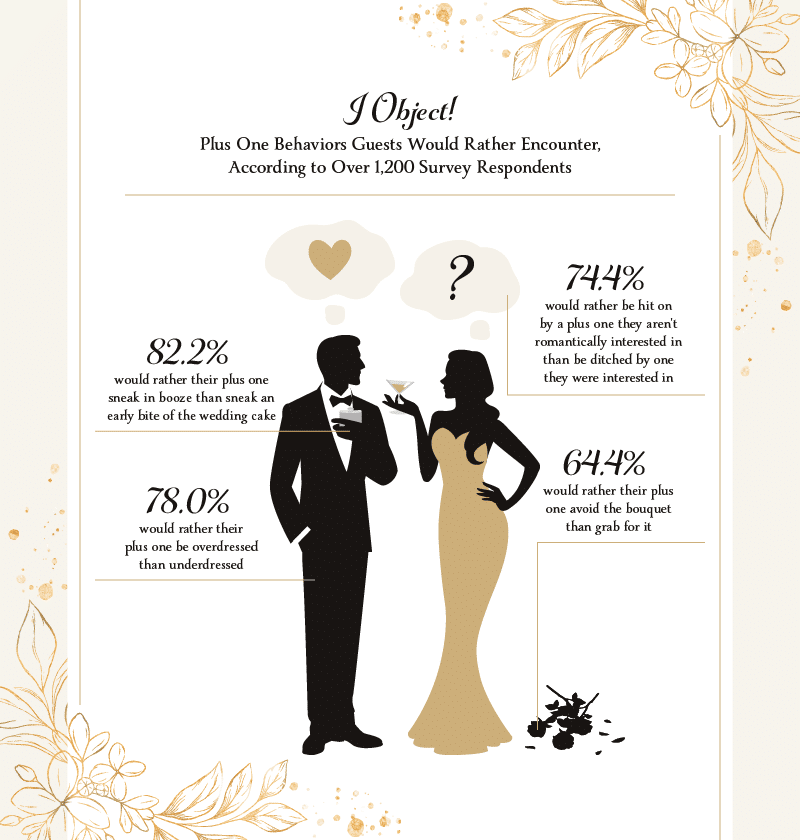 Sometimes at a wedding, you can’t have it all (unless you’re the husband-to-be) so you settle for plus-one behaviors that are just slightly less humiliating. For example, 82.2% of respondents would prefer their plus one to sneak their own booze into the celebration than sneak an early bite of the wedding cake. We get it. You can manage to dissociate from a disorderly drunk. A cake thief though? That crosses a line there is no coming back from.

We also discovered that 78.0% of guests would rather their plus one be overdressed than underdressed. This is an interesting one because is wearing a tux or white gown to someone else’s wedding really better than showing up in your lockdown best?

Once more, our respondents were willing to endure awkward behavior if it meant their plus one would stay by their side through the night. According to our results, three in four would rather be hit on by a plus one they weren’t interested in than ditched by one they were romantically pursuing.

Lastly, 64.4% of our respondents would rather their plus-one avoid the bouquet than grab for it. If they exhibited any of the above behaviors, we can’t blame you for not exactly lining up at the altar!

Overall, we learned that if you are bringing a plus-one to a wedding you were invited to, make sure they are a romantic partner and you know them well. No one wants them taking a bite out of the wedding cake before the leading couple or becoming overly emotional amid a 30-minute toast before everyone can eat their dinner.

If things do go awry at a wedding, our residents always know they can retreat back to the comfort of their home at The Waycroft. If you’re invited to a wedding in the Arlington area, stop in for a visit. We’d love to show you around.