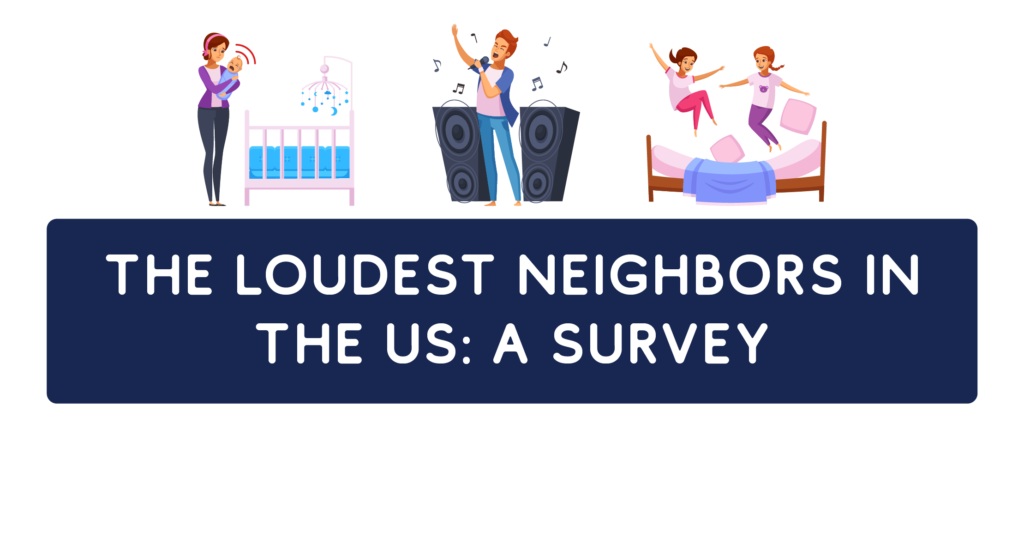 One of the unquestionable perks about living in a city apartment is the community that’s built around you. Neighbors can become emergency pet-sitters, potluck guests, and even close friends. At The Waycroft, we love the neighborly atmosphere made possible by our gorgeous community spaces, including our recently opened rooftop pool area (complete with social distancing safety precautions, of course!)

We also know that neighbors can sometimes grate on our nerves a little bit. Whether you live in an apartment, condo, or single-family house, one situation that everyone in a moderately dense area can relate to is too much noise coming from the next unit over.

Since the COVID-19 pandemic confined everyone to their homes, it’s safe to say that interruptions from noisy neighbors have increased – or at least we’re noticing them more than ever! We couldn’t help but wonder about who these extra loud folks are, where they live, and the etiquette around quieting them down. So, we decided to conduct a nationwide survey to better understand noisy people who live next door.

In order to gain some insights, we conducted an online survey of 5,510 American adults from all across the country about their noisy neighbor experiences. We asked them to share where and who these noisy neighbors were as well as what interruptive behaviors they had encountered. Finally, we asked them about how they responded to their noisy neighbors to get a better sense of the acceptable etiquette around these behaviors. The survey ran from June 15 to June 22, 2020.

Some of the results were surprising, some were infuriating, and others were downright hilarious! Read on to discover what we found.

The States with the Loudest and Quietest Neighbors 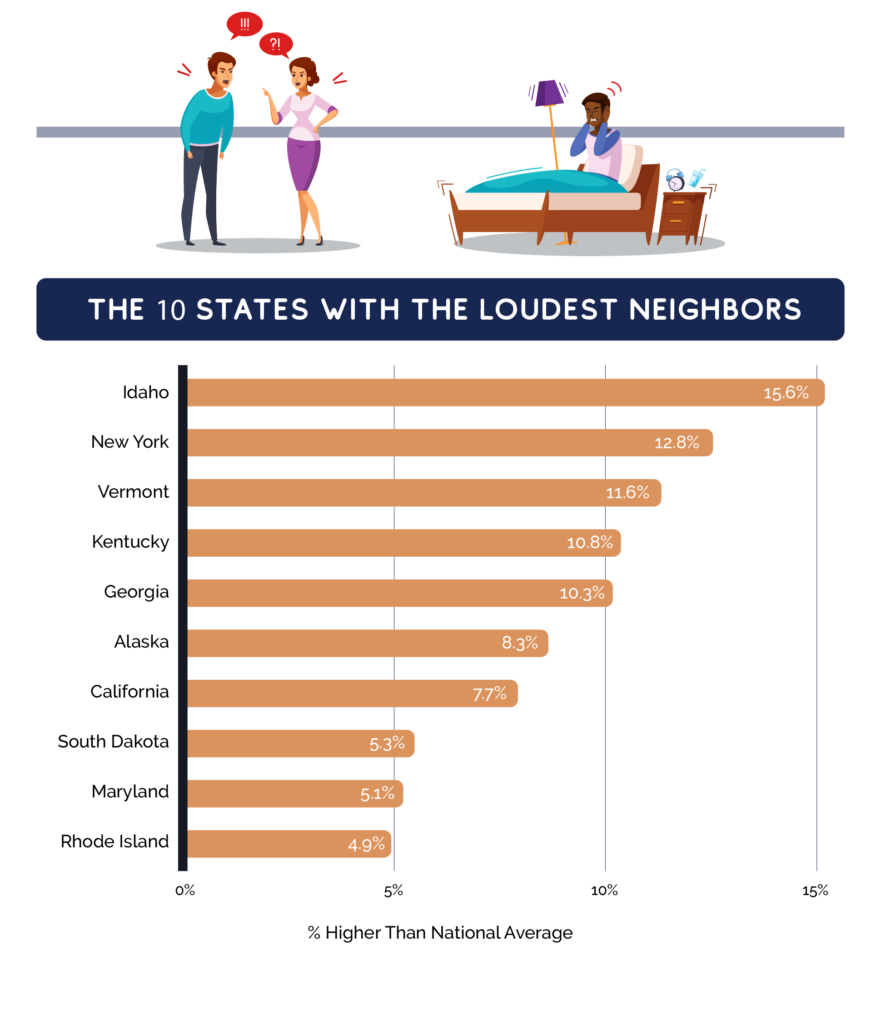 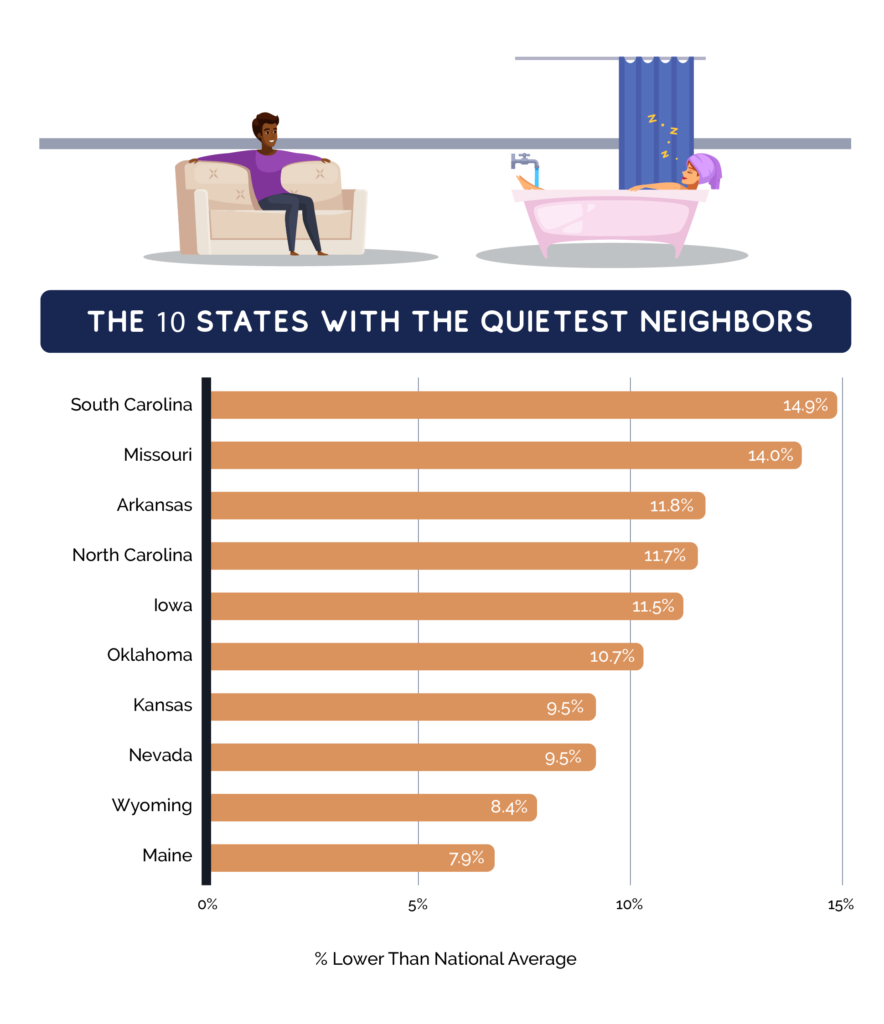 First, we had respondents rate their neighbors’ loudness based on a scale from one to three, and then we compared different groups to the national average. As you can see in the graphic above, the states with the noisiest neighbors were Idaho, New York, and Vermont, all of which were reported to be at least 11.5% louder than the national average.

While we were definitely expecting to see New York on the list (surely, New York City’s never-sleep attitude leads to some midnight chatter), we found the other states to be pretty surprising. After all, Idaho and Vermont, as well as many of the other top-scoring states, are famously serene and full of outdoorsy folks that might be more likely to take their noisy activities in nature. Apparently not!

On the other hand, the least noisy states included South Carolina, Missouri, and Arkansas. Each of these states has major cities where people would be likely to come across noisy neighbors, but perhaps residents in these states are simply more considerate or polite! 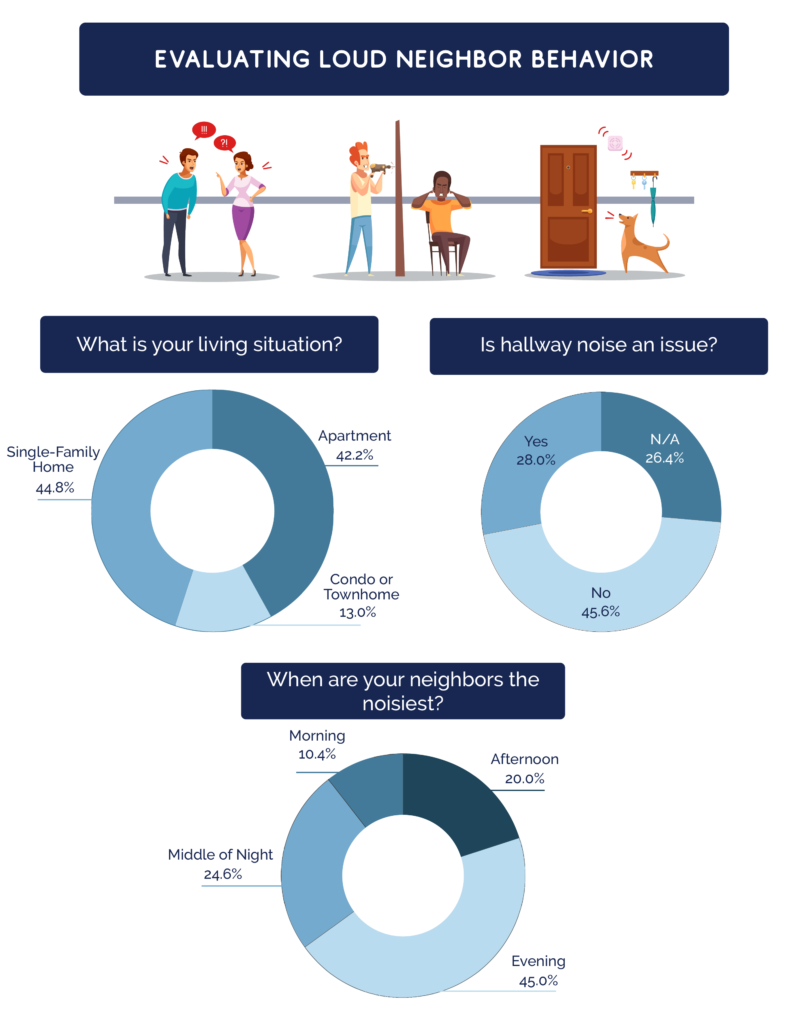 We found that, for the respondents we surveyed, roughly equal amounts of residents lived in single-family homes or apartments, making up about 90% of the sample group. The responses we received about noisy neighbors happened in all sorts of settings, not just the apartment scenarios that we are most familiar with at The Waycroft. This representation of single-family home dwellers meant that for many of the respondents, about 26%, hallway noise was not applicable to any issues with noisy neighbors they had. 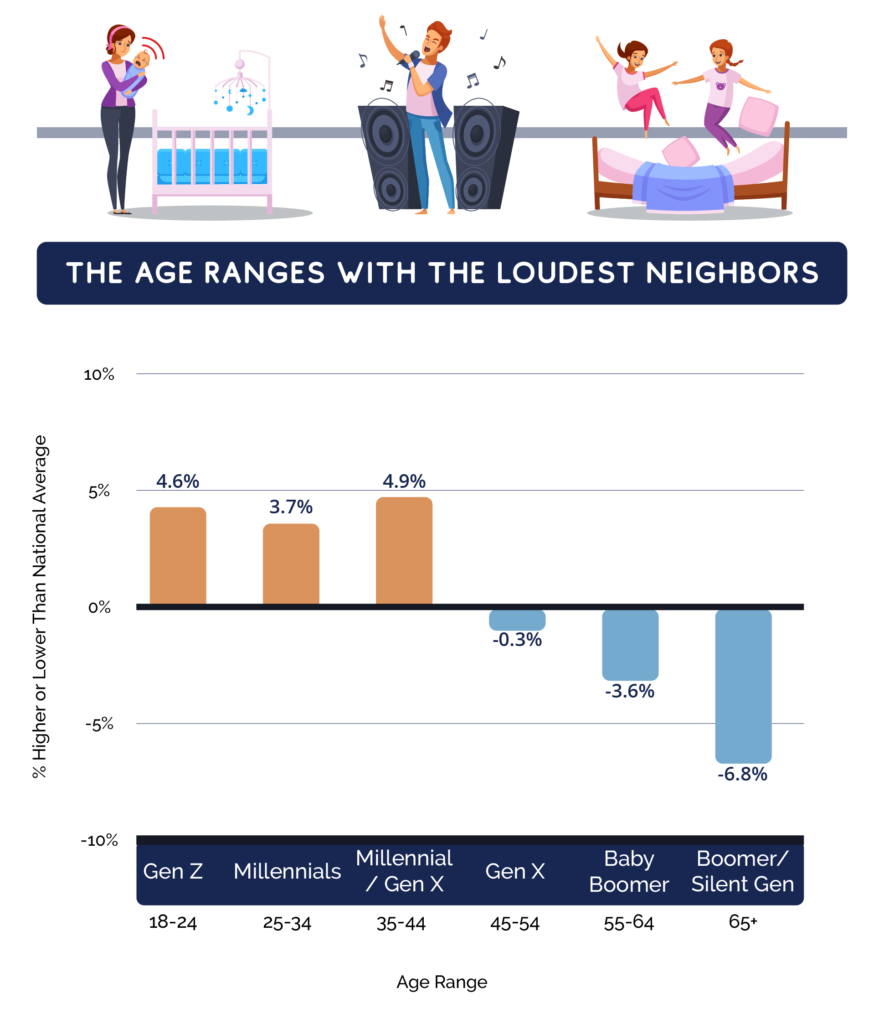 Next, we wanted to look at who exactly was making all this noise. The Waycroft hosts residents of all ages, so we wanted to get a sense of how the ages of our residents factor into any loud behaviors.

Perhaps not surprisingly, the survey found that the younger generations were definitely rowdier than their older counterparts. According to the survey, Millennials made the most noise at 4.9% greater than the national average, while Baby Boomers made far less noise, at 6.8% less than the national average. These comparative statistics indicate that folks with older neighbors may have less to worry about in terms of loud interruptions. However, with so many homes becoming multi-generational, it’s interesting to think about how age-overlaps may lead to higher ratings for reported noisy neighbors.

Of course, to get a complete understanding of who exactly is making the noise, it’s necessary to see what exactly is the cause of all the clatter. So, we asked survey respondents about the most common and most unusual loud neighbor behaviors – and we had a good laugh at some of the responses! 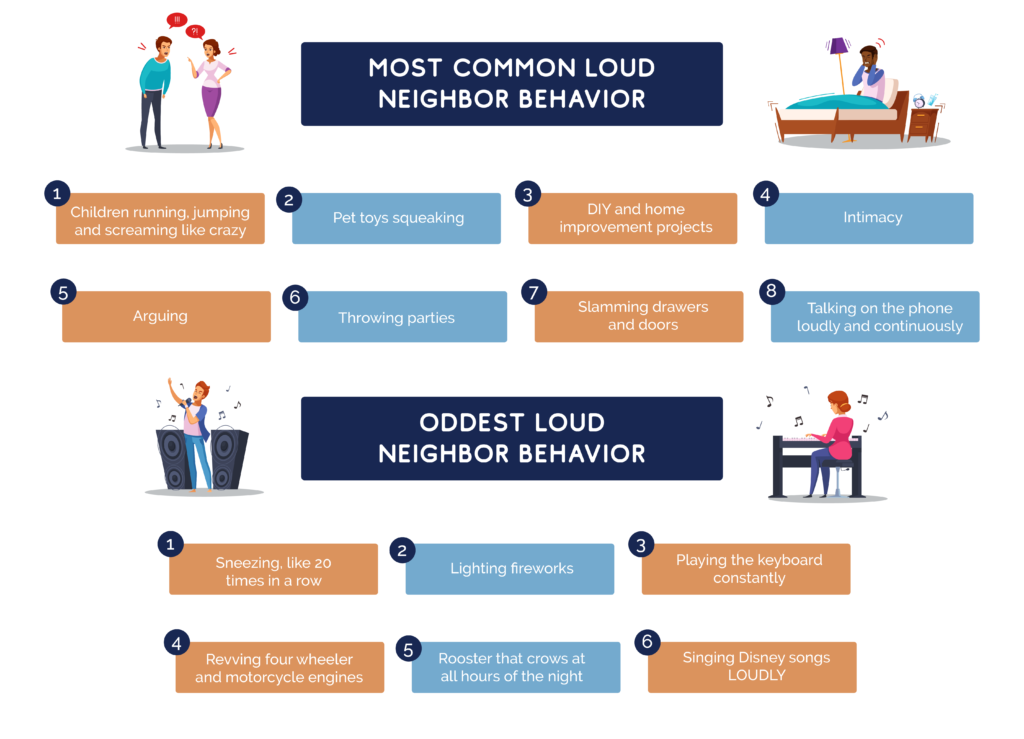 What we found was that the smallest neighbors were sometimes responsible for the biggest noises. The top two noisy behaviors reported were caused by boisterous children and playful pets. It’s hard to get mad at kids and pets for making noise, especially when they are also some of the cutest neighbors around!

Other notable behaviors were the products of relationships, such as intimacy and arguing. However, other causes like singing, playing musical instruments, and working on DIY projects proved that even a single neighbor could be interruptive.

How Americans Deal with Noisy Neighbors 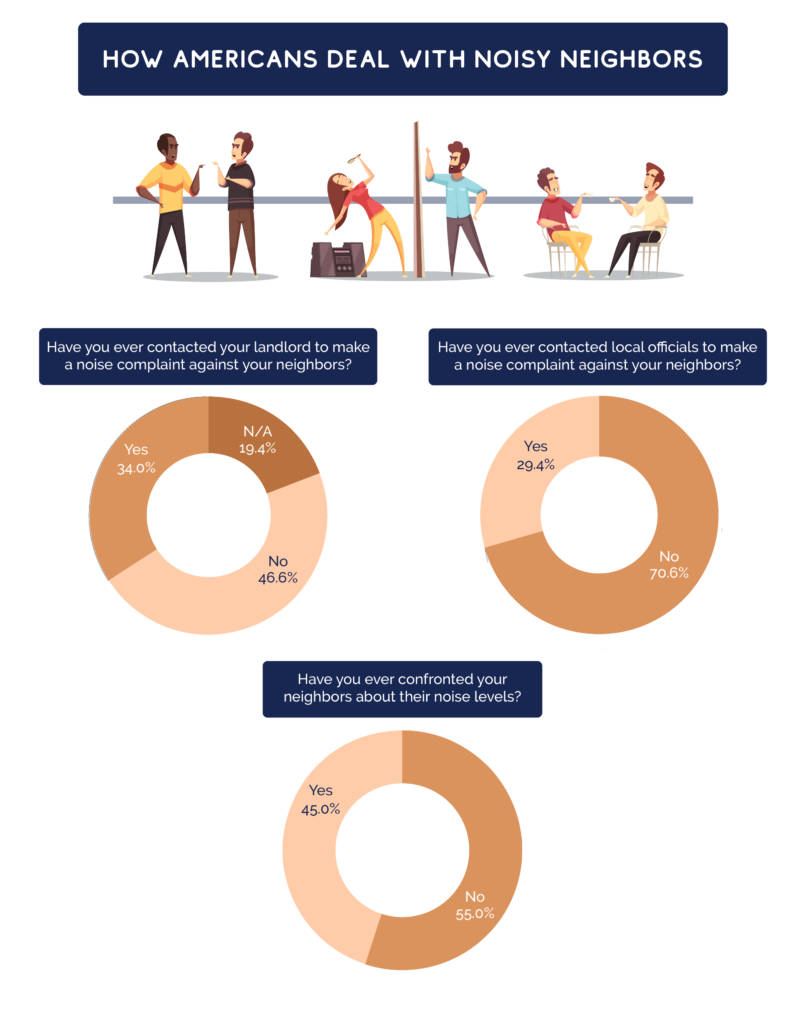 Finally, after getting a better idea about the details of noisy neighbors encountered by respondents, we wanted to understand how respondents react. We asked a few questions about their common responses to get a sense of the etiquette around dealing with loud neighbors.

However, these loud residents didn’t get off scot-free. About 45% of respondents said they had confronted their neighbors about interruptive noise. It’s an encouraging sign that community-based solutions are preferred, but don’t be afraid to contact support from your management if needed!

In the end, what we learned from the survey is that noisy neighbors are inevitable, especially when you live near younger people with pets, kids, or noisy hobbies. However, if you’re willing to form a neighborly relationship, you can definitely reach out with a request to quiet down. Turning your living space into a home is a lot easier when you have neighbors you can interact with easily.  To learn more about Ballston, where our residents bond, check out our neighborhood page. 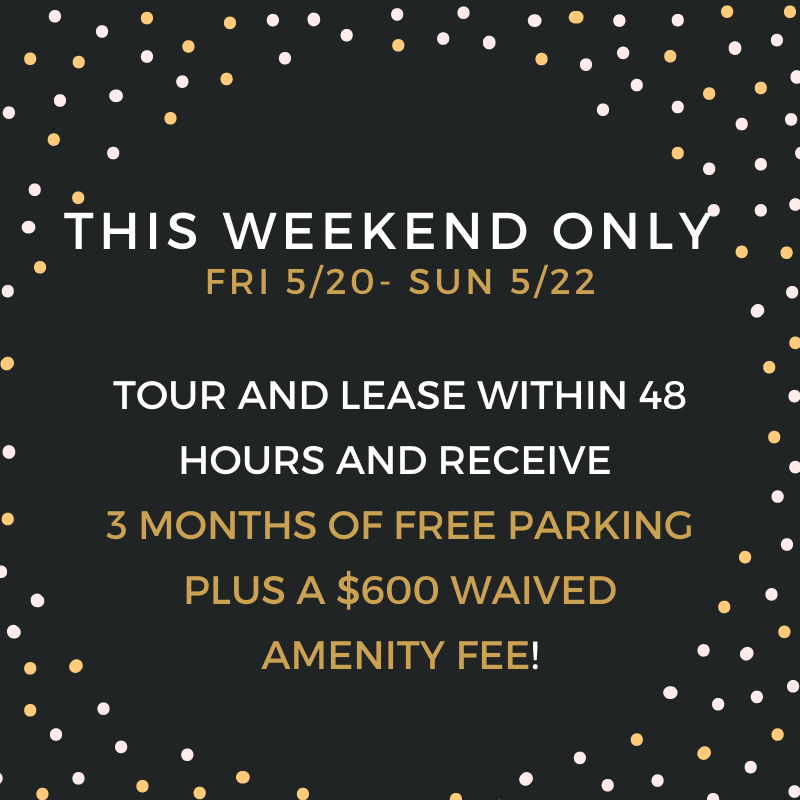